“Not only are [sailors] telling themselves to keep going, but now they have another voice—that isn’t a small whisper inside their head—telling them to ‘hike harder’ or ‘be more balanced’ throughout the entire race. It definitely unlocks a part of your brain and really makes everyone push each other at an entirely different level.”

Top youth sailors from around the country, plus select international athletes, took advantage of the Thanksgiving holiday to assemble in Miami for three days of intensive and innovative training. Organized by US Sailing’s Olympic Development Program (ODP) in cooperation with regional racing teams and the US Sailing Center Miami, the ODP Racing Camp challenged athletes to demonstrate their skills in a hybrid racing and educational environment. Results were kept, but coaches, including regular ODP staff and coaches from a number of regional training groups focused on collaboration and identifying areas of mutual improvement. Coaches were able to approach sailors during all stages of the racing and provide continuous feedback. Each day the full group gathered for a morning debrief to discuss what was learned the day before and the plan for that day’s racing. 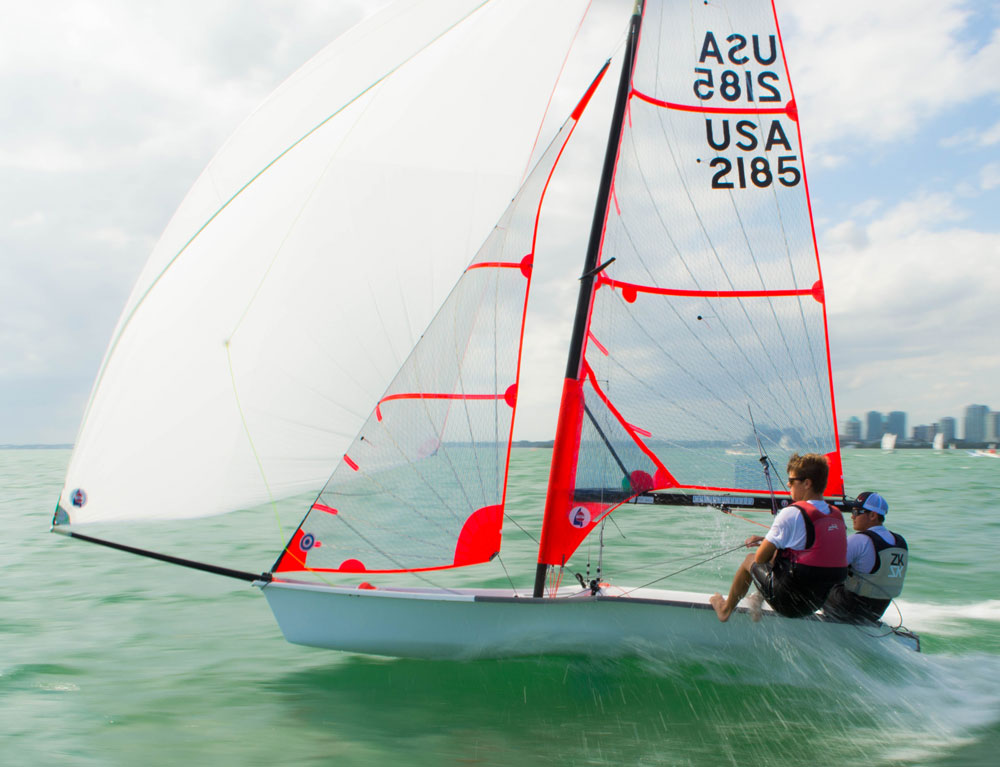 The camp was open to youth sailors in the 29er, International 420, Laser Radial and Nacra 15 classes, which are mainstays of top international youth competition. While there was a spread of skill levels and a variety of agendas and goals among the 133 sailors, the camp went smoothly and the response from sailors was universally positive. Results can be found here.

The weekend also served as the final training camp for a handful of American teenagers who will head to Auckland, New Zealand, in a few weeks for the 2016 Youth World Sailing Championships. Augmenting the preparation of U.S. Youth Worlds Team athletes is a key annual objective of the ODP, and this year’s effort was the most extensive yet. In addition to receiving elite coaching, 2016 YWT athletes at the camp had the benefit of being pushed hard by dozens of the country’s best sailors, some of whom will go on to represent the United States at future editions of the world’s premier youth sailing event.

“For our Youth Worlds Team, the timing was perfect,” said Leandro Spina, US Sailing’s Olympic Development Director. “This was a final chance to fine tune racing skills. This is one reason why the controlled environment was so effective. But it worked very well for everybody that participated. We hit a lot of targets in the same weekend.”

“The reason this camp worked really well is all the coaches were on the same page; they understood that we’re focused on helping all sailors. We controlled the environment, so we decided whether to have an extra race, when to start sailing, whether to make the course longer or shorter or to favor one side of the starting line. We started each day with a morning briefing where we talked about the day and then each group was free to follow its own routine. After racing, everyone debriefed on their own. The next morning we regrouped and talked about what we learned the previous day. ODP camps are a natural place for everybody to work together and to race. It worked so well, we’re so excited about it, we’re going to do it again next year.”The morning briefing is when we encourage everyone to share. We had regional team coaches briefing all the sailors and sharing what they’d seen the day before. We also had ODP experts talking about the mental and the technical components of the sport. We also had sailors sharing what they learned the previous day.

“We believe in two things: the power of sharing and the value of strong competition. Without competition, sharing information does not help. But racing without sharing is a missed opportunity. Everybody benefits from our approach.”

Anna Weis, Laser Radial
“Lots of top U.S. sailors were here, and we had really good coaches. It was really helpful to sit down at the end of the day and talk about what happened on the racecourse, our technique in the boat, and the things that were important to going fast or being tactically smart. The combination clinic and regatta gave us a chance to race, but not with so much pressure to get a good result. Because I didn’t feel like I needed to do well, I just tried to focus on what we talked about in the meetings and what we needed to work on.”

Kate Stewart, 29er crew
“We learned heaps at the camp. The racing was great. It’s amazing how much was shared within the group and the caliber of the coaching available. It was a real privilege to be involved.” 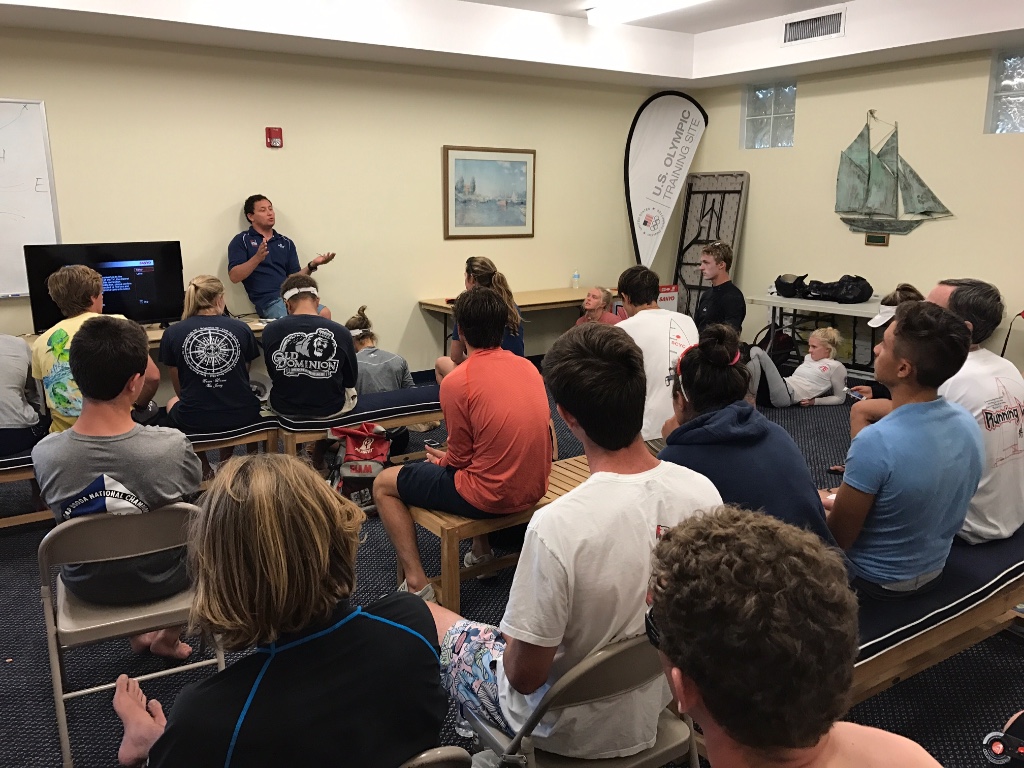 Neil Marcellini, 29er helm
“There was definitely less pressure because it wasn’t an actual event. But we were still trying to perform like it was. Basically it came down to asking more questions of the coaches during the day and getting a little more support than we would’ve during a normal regatta.”

“We found it a lot more useful than a clinic because instead of just doing drills that mimic racing, we’re doing the racing and getting the coaching. It was really good to see where we’re at in all aspects of our racing.”

“This is probably the biggest fleet we’ve seen at a clinic. It shows that the 29er is becoming a lot more popular and mainstream and people are starting to take it seriously as a competitive fleet. It’s not just a bunch of nuts out there ripping around, it’s actual racing.”

Aidan Doyle, 29er crew
“One thing that stood out for me is when we were racing upwind in a race and it was really intense and we were focused on our sailing and we looked back and saw a coach talking to another boat, which was a little scary. But at the same time, during one of our starts we were a little slow and a coach came over and told us to change one thing and we started edging out a little bit.”

“I treated it just like a regatta, but I love the format. In the morning we’d have the skippers meeting and coaching session and the coaches would say what they saw and give their tips, then we’d go out a little early—they had the first race late—so we could practice our pre-race routine.”

“I thought the conditions were really tricky and I was confused at first. Definitely having the coaching helped. It was of one of those things where you had to go out and race to understand what was going on. It took me a couple of races to figure out. I was really happy with how I performed given I didn’t initially understand the conditions.”

Sophia Reineke, Laser Radial, Youth Worlds Team Member
“I feel as though I sailed well in accordance with my process goals. If you go out every day with your goals in mind and a positive attitude, you are always bound to learn something and improve your skills. I used this as one of my final tune-up events before Worlds, and it really helped me get rid of all of the kinks in my skill set. The conditions were tricky, and the fleet was competitive. It couldn’t have been a better training event.”

Richard Feeny is a sailor, educator, adventurer. He lives in Bristol, Rhode Island with his wife Mary. He is a national and world champion sailor. He is as a freelance sailing coach, captain, and consultant. View more posts

This site uses Akismet to reduce spam. Learn how your comment data is processed.